It all started when I met Smegma members Jackie and Eric. At one of their regular sessions in their home, enjoying Jackie’s cookies, a laid back evening turned into a really deep experience. It doesn’t matter if you are a musician or not, you can make sound. Almost like an accident, a curious sound is born, or even something more. When you find it you can play. In their own home, in the garden, they share a performance with the people around. This must be how the scene itself began, and how it has continued. This is the feeling one gets from the Portland music scene. According to the the article “DIY before it existed: An interview with Smegma“, when they had just moved here in the 70s it was still a conservative town. They were not necessarily accepted by a lot of the audience, and they decided to do it on their own, without a manager. They have been active since before the DIY aesthetic existed, and are still very active, organizing various events, and intermingling openly with young local artists. It was no doubt a compelling beginning in an unexpected setting. And so it was, while going around to live shows in Portland, that I happened to meet a Japanese girl named Emi. While working in Portland, she has been following the noise music scene here. Even though she didn’t know how to get into the scene at first, groping around for venues and meeting artists, she soon found herself right there. In an unknown land, almost by sense of smell she was able to seek out and probe to find the core of this vibrant scene. Having been so long since I met such a person, I found myself wanting to talk more with her and ask about her experience. This is my interview with her about the noise music scene in Portland.

What got you interested in Portland’s noise music scene?
Before I came to Portland, I lived in Tokyo and was interested in noise music. I knew about Smegma in Portland, so I figured there was a scene going on there. Then I saw the documentary, People Who Do Noise, and was quite inspired by that.

What were you listening to before that?
My freshman year of high school, I went to a Shonen Knife show and the opening band, DMBQ, blew me away. I was trying to keep up with as much as I could: indie rock, hardcore, noise, and experimental bands, and of course I knew about Boredoms. I was going to venues after school, still wearing my school uniform. In my early 20s, psychedelic trance was at its peak and I was way into that, and then in my late 20s the dance party scene was big. Since I came to Portland, I haven’t enjoyed pure dance music much, and now I’m just digging the underground scene.

When you came to Portland, how did you get in touch with the local scene?
I searched in free newspapers’ cultural events and concert guides, I looked on Myspace and Facebook, and I also got information from friends in bands from Japan who had toured here. Feeling like I was grasping at straws, I tried my best to make connections at shows. I met people and they would tell me where I could find more. I found that the noise and experimental scene was really happening at house shows.

Speaking of house shows, the scene in Japan isn’t so intimate as it is here, don’t you think?
Right. No matter what genre, you can catch up-and-coming bands here, especially experimental groups, playing basement shows, since Portland is mainly made up of small houses, and people live together with roommates and there is usually room in the basement for performances. People bring their own drinks, and if it’s summer sometimes there is a cookout going on in the yard. It’s a really relaxed vibe. It seems lately that house shows are decreasing, but you can find them if you look.

It seemed to me that there are fewer barriers between generations compared to Japan. I was impressed by that, do you feel the same way?
In my twenties I really liked psychedelic trance, so I backpacked around Europe where it came from, and I felt the same way. So It’s not just Portland, but all over the west, there is age and gender diversity in any music scene. If only Japanese artists and audience now in their 30s and 40s stick around…that includes me (laughs). And it’s not just age, but totally barrier-free. Mid-sized and larger venues usually have at least one person in a wheelchair, so I think barriers in general will continue to shrink in every way.

I have heard that the town is rapidly changing as new people move in and long-time residents leave. Over the last 5 years, do you feel the scene has changed? And, do you feel the scene is still active?
A lot of major venues have shut down over the past 5 years. Artistery, where you could see great experimental stuff; the long-standing Satyricon, which I’ve been told is where Kurt Cobain and Courtney Love met; Berbati’s Pan (at the corner where the flagship Voodoo Doughnut is still located), a mid-sized place you could see all genres; Slab Town, an all-ages* venue which tried to avoid closing with a GoFundMe campaign to no avail. Then there is East End, which has been closed since it was discovered that it was not up to fire code after a fire in the building that houses the venue. East End used to block off the street outside and hold a metal festival every year on Independence Day. Considering the population, Portland has a large number of venues, but listing all the closings this way feels disheartening. Many of the people I met at house shows when I originally came to Portland have to moved to LA or NYC, but about half of the people in the documentary I mentioned earlier, People Who Do Noise, are still doing shows around here. *In Oregon, venues have very strict age restrictions, and most venues only allow people 21 and over. In venues where people under 21 are allowed, they must stay in a restricted area. 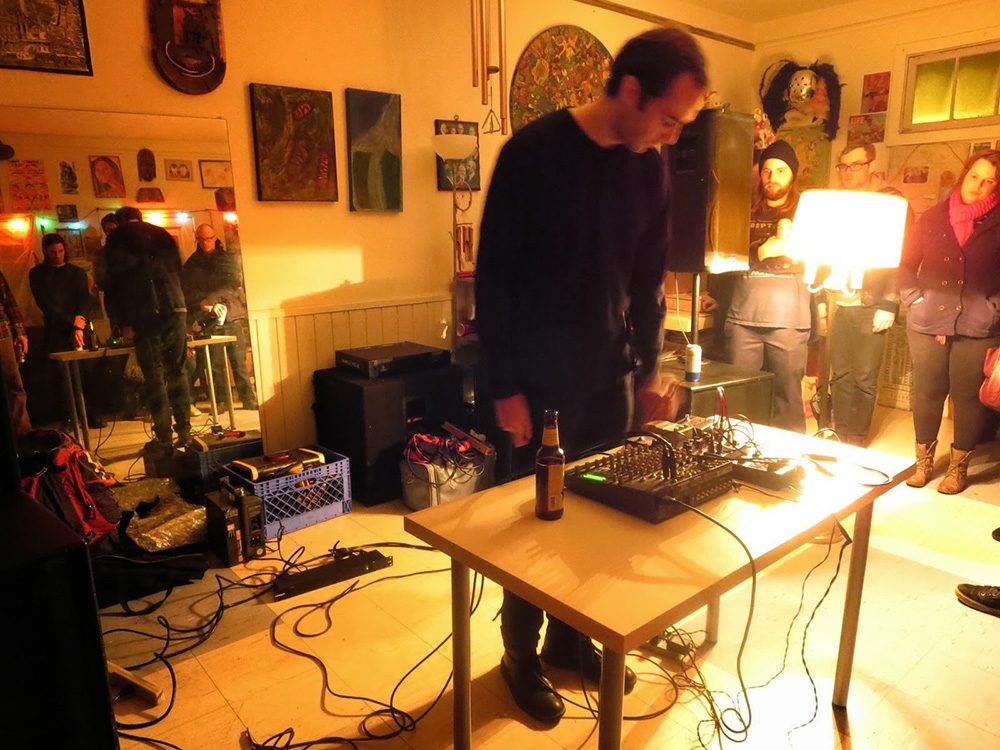 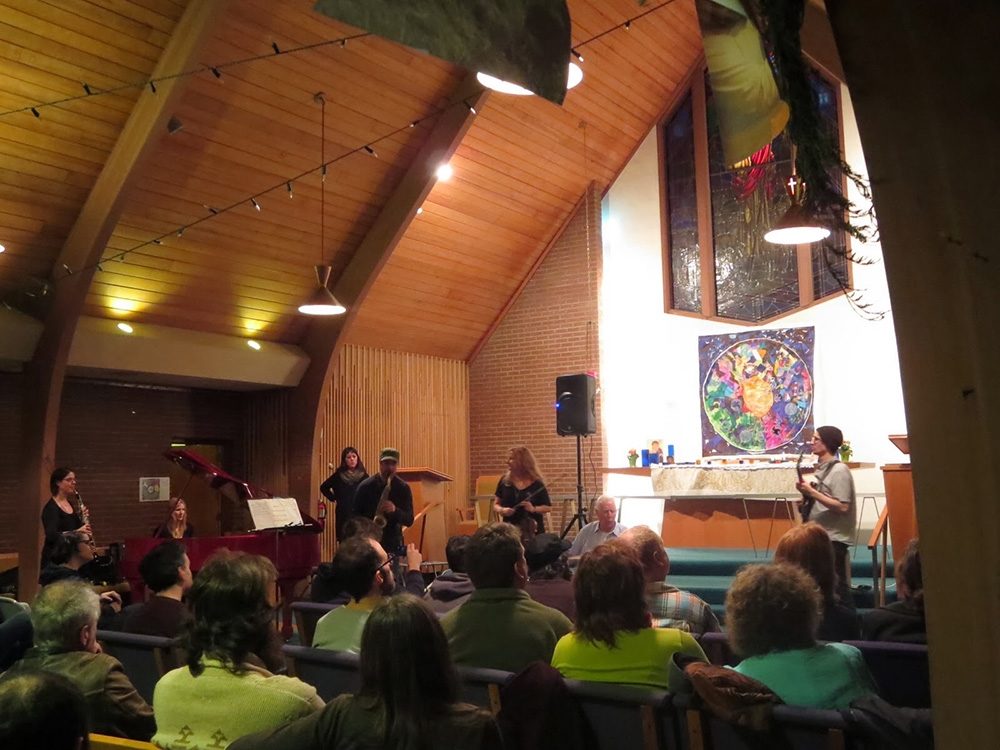 Are there any particular artists that you are following?
Of the older artists, members of Smegma attend events even when they aren’t playing and mingle with younger artists, and that’s big. Joe (aka Thrones) does this, too. Daniel Menche recently toured Japan. His live shows frequently change, and it’s always a different experience. Matt, who was playing a lot of house shows when I first came to Portland isn’t performing much due to a situation with his home, but he is still active under the name Red Neck. He loves horror movies, and in his performances he smears his face with blueberries while playing harsh noise, plays dead, and it’s really an interesting performance. Todd, who performs solo as Soap Purse, and who also started a unique improv-band called Fiasco with his housemates, lives in a house that doubles as the Alice Coltrane Memorial Coliseum, which frequently hosts noise shows, but is rumored to have been put up for sale meaning everyone has to move out. As of now, I don’t know what is happening with that space. Todd is interesting to talk to, and Soap Purse’s performances are completely different every time, but always good. Gordon Ashworth is very active, organizing events, going on tour in Japan, Europe, and the US, and also played in a festival for two years which is held in the summer that has a lineup which alternates noise and metal performers. He sometimes records and performs as Oscillating Innards, and sometimes as Concern. I often go to see a duo called Golden Retriever. Everytime they play, they create complex combinations of colorful chords with modular synth and bass clarinet which fill the space like a grand film score. Matt Carlson, the synth player, also has frequent solo outings. The other day, he led a performance in a church with a 15 person orchestra that merged experimental and classical elements, and I love that kind of fusion. I think it’d be great if there were more crossover between genres in general. And I have been watching MSHR, an experimental music project by Birch, whose partner, Brenna, was on the cover of The Massage 10. Their original lighting for their stuff creates an unimagineable performance which really can’t be missed. Additionally, though it’s not noise, I recommend you check out 1939 Ensemble. It’s a trio with ex-Breeders drummer, José, who manages a drum shop; another drummer, Dave, who teaches drums at a music school; and Josh, who moved here from Seattle a few years ago, on sax and Moog synth. The above-mentioned drummers switch between vibes and drums mid-performance. They have opened for groups such as BATTLES and Peter Brotzmann, and are slowing gaining recognition.

Any places to watch right now in Portland?
There aren’t as many as before, but Projection Museum, Valentine’s and Yale Union have some good stuff in the works. If you want to be enveloped in sound until your hairs stand on end, there’s The Know, and Kenton Club. Then there are churches that are planning some underground music shows; I personally love that kind of environment. The ceilings are high, the sound really moves and resonates, and there is a holiness about the atmosphere that’s particularly interesting contrasted by the noise music. A while ago, Charlemagne performed in a college church, with a huge circular organ hanging like a spaceship from the ceiling. The sound was so extremely loud, despite the fact that some people had come with their kids. If you get the chance, I hope you can experience a house show. It’s not really something you see in Japan. It happens in someone’s home! You will be overwhelmed by the artistry you encounter, yet the stairs might be falling apart and the bathroom looks like it has never once been cleaned (laughs). It’s no longer going on, but there was an event called Noise Pancake, a perfect fusion of noise music show and pancake eating party that was held on Sundays. I once went to a noise show in the Portland suburbs held in a welding studio. Unfortunately, that too is no longer happening. It was held in a room full of tools out in the open, so industrial, and the lineup was perfectly Northwest.

If someone comes from Japan, how should they discover the scene?
Just come to Portland! Or invite Portland artists to play in Japan!!

Emi Otaki Joyce
Having planned on staying for a short language exchange in Portland, Oregon, it has now been 5 years since she was capitvated by the exquisite beauty and wonder of this town situated in the natural wonder of the Pacific Northwest. She enjoys cultivating and using indigo for dye, and mushroom hunting. She occasionally updates her Portland music blog. http://emioopdx.tumblr.com