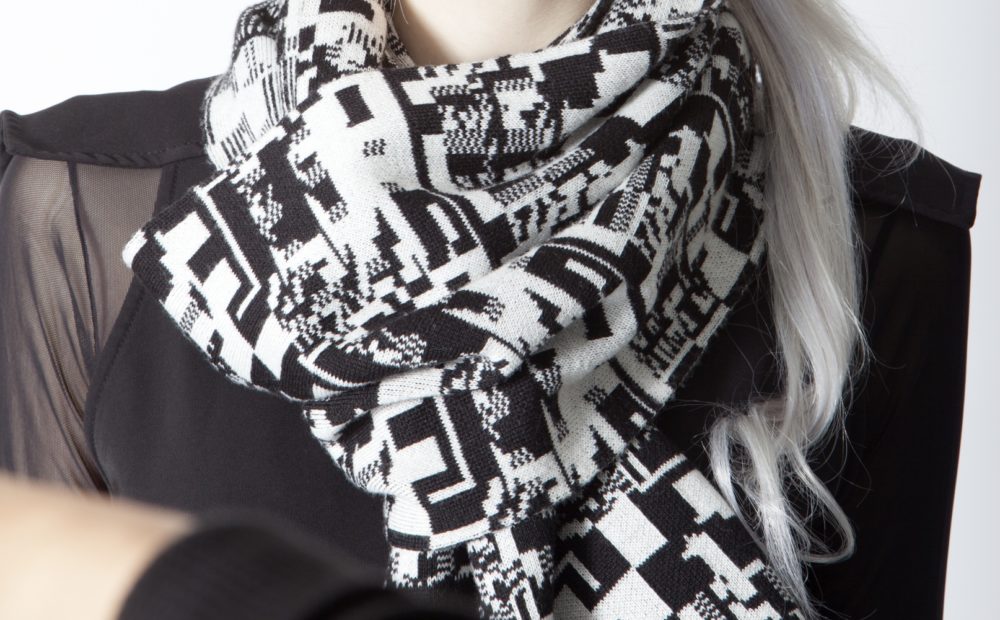 What kind of feeling did you have from exhibiting your works at Isetan in Japan?
I am very grateful to have exhibited my works at Istetan. It was exciting to see the others artists works and to be surrounded by designers from around the world. The exhibition was very professional and the presentation looked great.

Is this the second time to come to Japan?
Yes. The first time was in 2011 to perform at Koenji High for the Blip Festival chiptune concerts. It is one of my favorite cities.

Could you tell us about your background?
I was born in Texas and on account of my parent’s work, I lived in various places like Hawaii and Michigan. I’ve spent most of my time on the east coast. I grew up skateboarding and playing video games in the 1980s. I lived in Baltimore for nine years, playing guitar in bands before moving to New York City. In 2001, while studying music composition at college, I applied extended music techniques to video game systems. This video work directly led to my textile design concepts. In 2007 I released my first edition of scarves. In 2011 I established my Glitchaus studio label.

What were the band names?
One was an instrumental progressive/math rock band called “The French Mistake”. That band toured in the late 1990s and released one 7” record on Vermin Scum records. The other band, “Wzt Hearts”, was active from about 2004-2008 and was a free improvisation/noise band. “Wzt Hearts” released two records on Carpark and Hoss Records.

The original inspiration was a dream I had back in 2001. I dreamed that I was creating abstract art with my Nintendo. So, when I woke up I figured out how to do it. John Cage was, of course, a very big influence from when I studied music composition and extended techniques. The term “prepared” is borrowed from his “prepared piano” to describe what I do. It made perfect sense to me. Just as Cage prepared pianos with objects to change their timbre, I add wires to change what the video systems do. 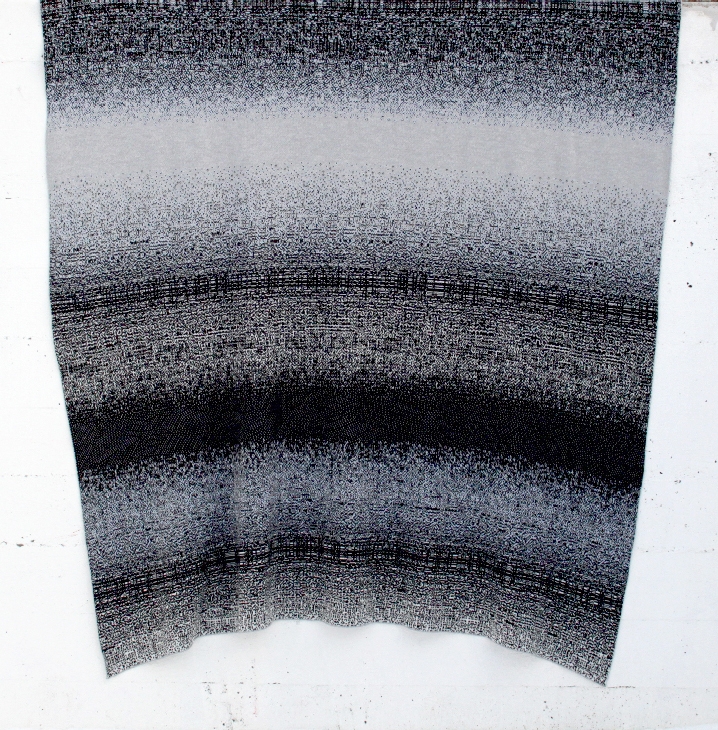 How do you make your glitch process?
I use a few different processes. The first and, I guess the one I’m best known for, is preparing a Nintendo Entertainment System to intentionally short-circuit by adding wiring to the system’s circuit board. I call the results of this process “Notendo.” It’s a technique that some refer to as “circuit bending.” People usually “circuit bend” battery powered sound toys. What I did in 2001 was apply the technique to mains powered video devices. I also prepare video mixers to create video paintings.
Two other techniques I use are what is referred to as “data bending” and data visualization. “Data bending” is an early “glitch art” technique that involves the manipulation of file data. I like using hexadecimal editors for this. It’s also possible to open image files, for example, as text with Notepad or Text Edit. The results are similar. I used this technique for the houndstooth scarf.
I use data visualization processes for my “Data Knit” series. For this I use custom software to view binary data graphically.

What were you influenced by to make your glitch works?
The original inspiration was a dream I had back in 2001. I dreamed that I was creating abstract art with my Nintendo. So, when I woke up I figured out how to do it.
John Cage was, of course, a very big influence from when I studied music composition and extended techniques. The term “prepared” is borrowed from his “prepared piano” to describe what I do. It made perfect sense to me. Just as Cage prepared pianos with objects to change their timbre, I add wires to change what the video systems do.
When I was developing my process, the results reminded me of textile motifs like the ones that are found in North and South America. From there I became very interested and influenced by the history of fiber arts.
I’m also influenced a lot by film and music. In 2001 I was listening to a lot of contemporary jazz. The free-forms of jazz improvisation influenced my approach to creating live video.

What is the reason attracted by the glitch technique?
What attracted me in the beginning and still attracts me now is the chance nature of the art form. There is always a surprise. It’s possible to have an idea of what to expect but the outcome is always different.

What was the purpose of making scarfs? Was it for exhibition or for sale?
The scarves from 2007 were the first edition of textiles I designed with my prepared NES. It was a way to test out my concept that glitches can resemble traditional and contemporary textile design. By making scarves, it was also a way to leak the idea into fashion. I’ve always considered my textiles as art that can be exhibited as well as worn.

How did you sell them?
I sold them through the internet and at video performances. A few friends also bought them.

When did you recognize the way of glitch for the first time?
The first time I remember experiencing a glitch was while playing video games in the 1980s. I wasn’t aware of what became known as the “glitch art” community until 2004. That’s when I got in contact with Ant Scott and Arcangel Constantini. I started exhibiting my prepared NES and SEGA work at events shortly after.

You are the leading pioneer in glitch.
I am one of a few who pioneered a specific form of glitch. Arcangel Constanini from Mexico City and I were two of the first to prepare video game systems to intentionally short-circuit. I also am one of the early people to have applied “glitch art” to textile design. 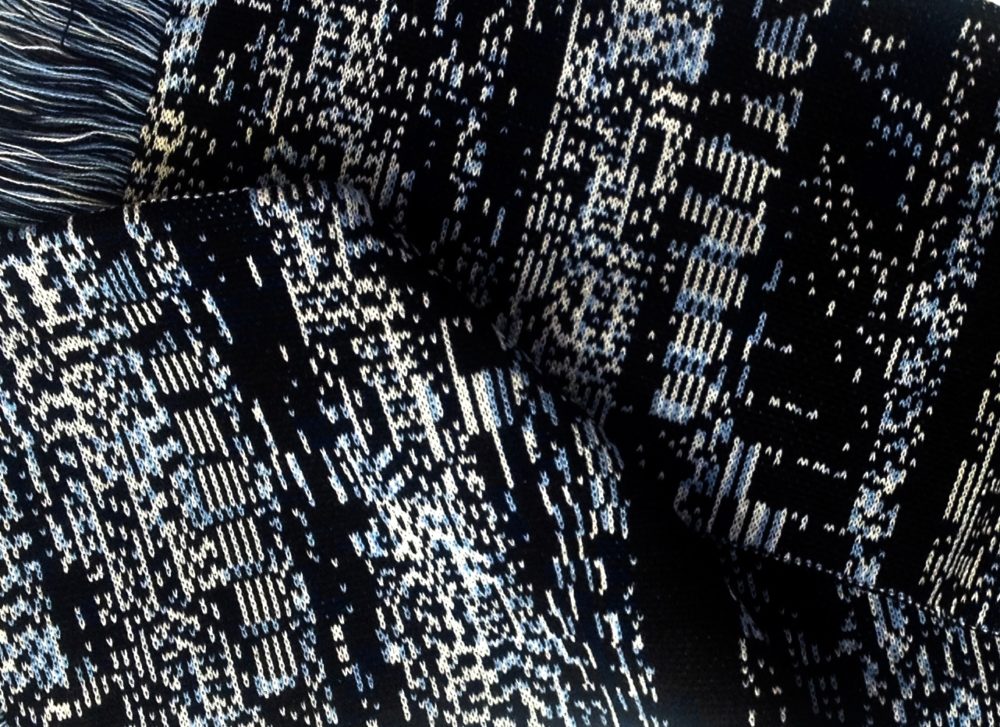 Do you like to find the way of making the new design?
I don’t set out specifically to find new ways. I follow my intuition. I like to stay open to let things happen.

You have recorded the videos since 1988 about skating. Its history is longer than music and making scarves. What are you interested in the best?
I am interested in all of them equally. My music practice led to my video practice which led to designing textiles. It is all interconnected.

How do you get your creative inspiration? Skating, music, what kind of thing do you have? And why do you start to make fashion items?
I’m mostly inspired by ancient art from around the world. The craftsmanship involved is truly incredible. There is so much detail and significance in each art work. I find it very beautiful. My sister had a business making custom bridal gowns and costume design for cinema always interested me. Growing up in the 1990s Jean Paul Gaultier was very popular. Gaultier’s costuming for The Cook, the Thief, His Wife & Her Lover, The Fifth Element and The City of Lost Children all made a big impression on me.

You make motion graphics by Nintendo. How do you make scarfs?
The scarf motifs that are generated with my prepared NES are first recorded as video. I choose still frames that I like from the video. Then I edit the image and send it to machine knitters in Germany to have it knit pixel to stitch.

When you make scarves, do you make it with other tools?
I’ve worked with the same machine knitters in Germany since 2007. Their quality is excellent and consistent. I also use Brother knitting machines. I have one at home that I use a modified FTDI cable to transfer motifs from my laptop over USB.

In glitch, is it that an accidental result is obtained to be interested the best?
Exactly yes. To me it’s the accidents that can sometimes be the most interesting because they are unexpected. Of course it is then a matter of finding out how to recreate the accidents. If it wasn’t for the accidents we wouldn’t have much glitch! 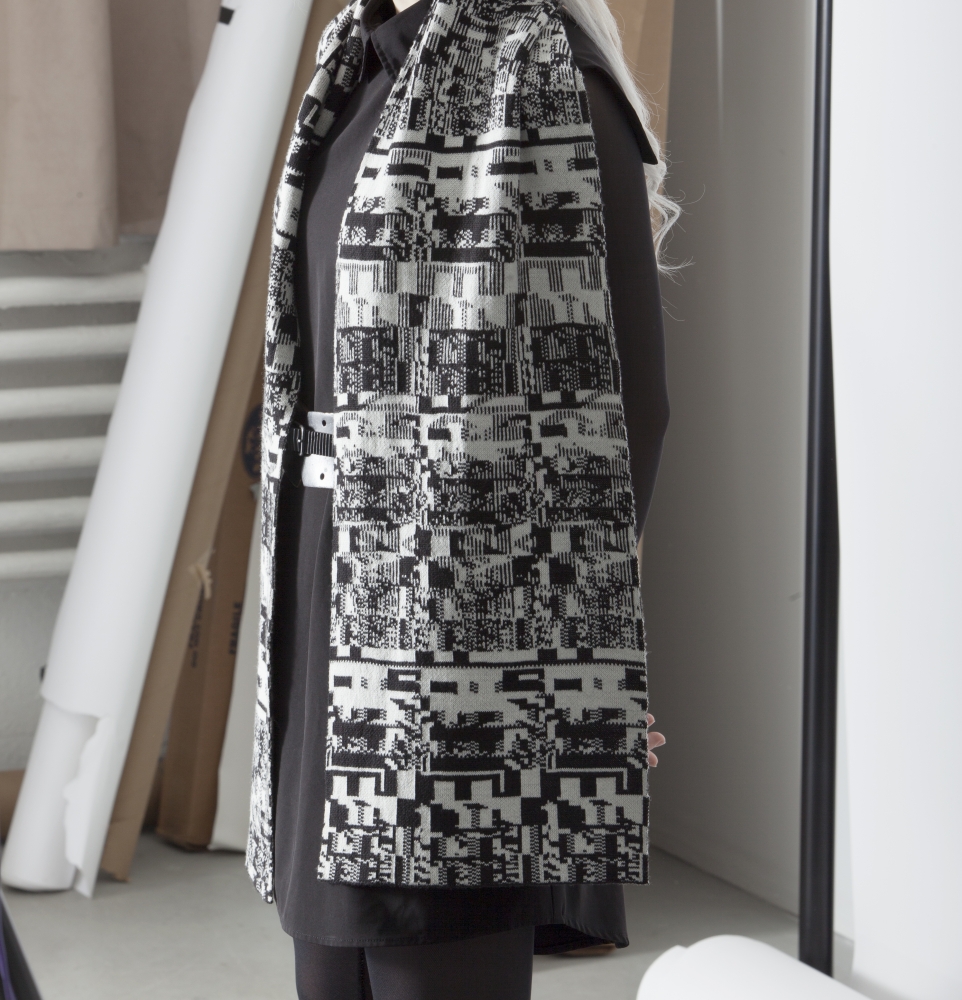 Around in 2008, after you announced your scarf, you saw other’s various works, what did you think?
The first person I saw applying similar concepts to textile design was Melissa Barron. I met Melissa in 2010 during the first GLI.TC/H conference in Chicago. I immediately loved her work and asked her to collaborate. Melissa wove one of my Read Error motifs and I included it in my Glitch Textiles exhibition at the 2011 Bent Festival in Brooklyn. Nukeme’s Glitch Embroidery and knit lace is some of the most original work I have seen in a while. His works are some of my personal favorites. I also am a fan of the UCNV/Bodysong collaboration. They created something very beautiful.

Is it the thing which the same result is given to even if other people do glitch?
It is usually easy to know what kind of technique was used when looking at “glitch art.” For this reason, I think the concept is as important as the design is.

An idea and the concept are important. Will a style be to be easy?
I think it’s much easier to fake a style than it is to fake a concept.

Do you think you want to make anything without using the technique of the glitch?
I am still interested in applying glitches and errors to textile, fashion, interior design etc. I also like analog errors. I worked with a Brother knitting machine that had a corrupted Knitic interface during a residency at the Electronic Textile Institute Berlin. This enabled me to knit a motif from machine error instead of from an image file. This type of machine error is one of many concepts I’m still interested in exploring. I feel like I am just getting started. Everything is still exciting.

Glitch of various thought comes out now, how do you think about the difference in style?
I think it’s important to have different styles. It keeps things interesting.