“Hausu mountain” is a music label founded by Doug Kaplan and Max Allison in 2012.  They have released experimental electronic music as if pioneering the rich unknown depths of the deep ocean.  From the use of a Japanese movie name in his label name, to Max Allison’s album cover art design, at the bottom of his creations lies a love for a wide range of things such as manga, retro games, sci-fi culture, and sub-culture.  Doug and Max are also known for being a member of the Good Willsmith trio.   Memories of their highly acclaimed new album released from “Umor Rex” are still fresh in my mind.  The music is harmonious with their label sound, with a lo-fi experimental feel.  It has the atmosphere and emotions as if traveling through time and space.  The rich sound spectrum including both electronic and organic sounds, is also a significant quality of their music.  The taste of their label is that of relentless exploration and experimentation, while having a fundamental quality of human warmth. Each of the members of the Good Willsmith group have just released independent solo albums (3 in total). To investigate the secret of their uniqueness, I have asked about the origins of their concept, their founding, about their band project Good Willsmith.

Could you tell us the label history? How did you two get to know each other, also how did you establish your label?

We (Doug and Max) met each other in college at Northwestern University in Evanston, and we became best friends very fast! We started a rock band together called The Earth is a Man. After graduating in 2011, we moved in together in Chicago and continued to make more music. The label Hausu Mountain started in 2012 basically as a way for us to release our own music, like the bands Good Willsmith, and The Big Ship. We knew it would be hard to get these releases out with other labels, so we decided to do it all ourselves. Shortly after that we began to focus on releasing the music of other friends and projects. Doug and I are still best friends and we love working hard together on keeping the label running great.

I heard your label name was named after the title of the movie directed by Nobuhiko Obayashi. Is it true?

Yes, the label is named after Nobuhiko Obayashi’s movie Hausu/”House” – in combination with the name of Jodorowsky’s Holy Mountain. We love both of these movies. They are classics of psychedelic art, and contain so much wonder, humor, fright, surprise. We love these movies because they seem to represent entire worlds or universes of their own, with their own rules and their own unique atmospheres. We try to do the same thing with our record label – to build whole new psychedelic worlds, and to never take ourselves too seriously. Part of what makes these movies so classic is that they are always so fun and surprising to spend time with.

Because we started the label around the same time that we started Good Willsmith, the band became kind of like our flagship project for the label. But Good Willsmith has also worked with other labels, like Umor Rex and Baked Tapes, and of course Hausu Mountain works with many many different projects. I think the sound of Good Willsmith is very representative of what we like to release on our label: music performed live, music that is based on noise and texture, music that is very diverse and hard to describe, music that changes in atmosphere and moves between different vibes very fast, music that can be heavy and noisy, music that can be beautiful, music that combines electronics with non-electronic instruments, music that is improvised. This is true for Good Willsmith and for most of the other projects we work in. The biggest connection, though, between music activities and label management is that we have to do all of it at the same time! There is only so much time in life, and we are busy people. It can be hard to juggle Good Willsmith, all the responsibilities of Hausu Mountain, working on music for our solo projects, playing a lot of shows, and of course other jobs and work we have to do outside of music. But we love it, and wouldn’t do it any other way.

You have worked since 2012. Is there a change or evolution about the tendency or the direction of the label?

More than just a shift from releasing our own music to releasing the music of others, I think our label has changed in many ways since 2012. We have become more skilled and fast at getting music ready to be released, and better about publicizing it and spreading the word. Of course this is a natural effect of being around for a long time and having a bigger audience of people who are interested. This is a product of hard work, and of never giving up. In terms of the music itself, we have had time to meet many interesting musicians (usually from being on tour with Good Willsmith and playing shows with many acts), so we have been working with a bigger and more diverse set of artists than ever. Most of the music we release now tends to be on the “electronic” side of the spectrum – compared to the more acoustic or guitar-oriented sound of some early releases like The Big Ship. Now, we have so many different artists who use so many different methods to make music: beat music made with drum machines and computers, analog and modular synthesizers, vocals/voice mixed with electronics, all kinds of different ways to create.

It is clear that experimentality is respected on your label. What is the core of the concept of your label?

We do love experimental music the most. But of course, there are many different kinds of “experimentation.” At this point, we are less interested in experimental music that is static in nature, or focused on extremely slow development. We are interested in music that is complex, diverse, genre-bending, and exciting. As listeners, it is easy for us to get bored. We are no longer interested in 40-minute unchanging drone performances or walls of noise made in modern times. We like music that shows the brain of a creator as it thinks, changes, and works to make the music stimulate and entertain listeners. We like music that doesn’t follow other trends or try to be exactly like other artists. We like music that feels like a direct form of personal expression from an artist – a form of expression unique to that person, which no one else could achieve. This is the true definition of “experimental” to us.

One of the most interesting parts of Hausu Mountain is the sense of the time. We feel it like something old, at the same time, something new. Where does this sense come from?

Thank you. We love this idea! I think the idea of “anachronism” is important to us, maybe on a more subconscious level. Something that feels stuck in the wrong time period, that seems strangely old fashioned. This comes across in the visual art of the label, which is focused often on textures from video games and comic books. The subject matter of our album artwork is often “futuristic” in nature, like robots and technology and outer space. But the way these themes appear is often in a willfully stylized, even cartoonish way. This could blur the lines between the future and the past. This also comes across in the music itself. Many of our artists – including projects like Good Willsmith, Moth Cock, Davey Harms, Long Distance Poison, Piper Spray, Radiator Greys, and more – do not use computers or software to perform music, and willfully stick to using analog or hardware gear. This could make the sound seem like something from the past, due to the limitations of this equipment. However, these artists also succeed in making something that sounds new and weird and unique with this “old” equipment. This is the perfect combination for us. We are not as interested in appearing to be a futuristic, sleek, cybernetic type of label. We just want to release what we think is cool music, and to match that music with appropriately cool visuals, by our standards.

Artworks by you are always brilliant. There are motifs from video games or comics in them. Is the influence from those things, so-called “subculture”, strong?

Thank you! Max does most of the artwork for the label, though many artists also make the art themselves for their own releases, or get a friend to do it. Max is the in-house designer though, and does all of the comic and video game collage artwork. Video games and comics are both very influential in Max’s life. He was born in 1990, so he was a child/teenager during the early development of video games like SNES and N64 and Playstation. This form of art is extremely mind-opening, in terms of visual style and especially in terms of music. The same is true with comic books, graphic novels, and especially anime. All of these art forms influence the visual and musical style of Max. However, now, in 2016, Max doesn’t have time to play video games or read comic books anymore, thanks to the all the fun things he has to do for the label and for the band, etc. So the next best thing is to inject the style of video games and anime and comic books into the artwork for the label. Max’s goal is to reclaim the simple and beautiful textures of pixelated video game art and use them in a new way, outside of the history of video games. It might seem strange that a noise album would have video game pixels on its cover, but that is just one way to change or evolve the perception of video game imagery. It is not about the idea of nostalgia for these old art forms. The artwork is trying to say that these old art forms never left, and can always just be naturally beautiful and fun.

Could you tell us things that have given an influence on your label? Either music or something else will do.

So, so many things have influenced our label. Here is a short list of some major factors. 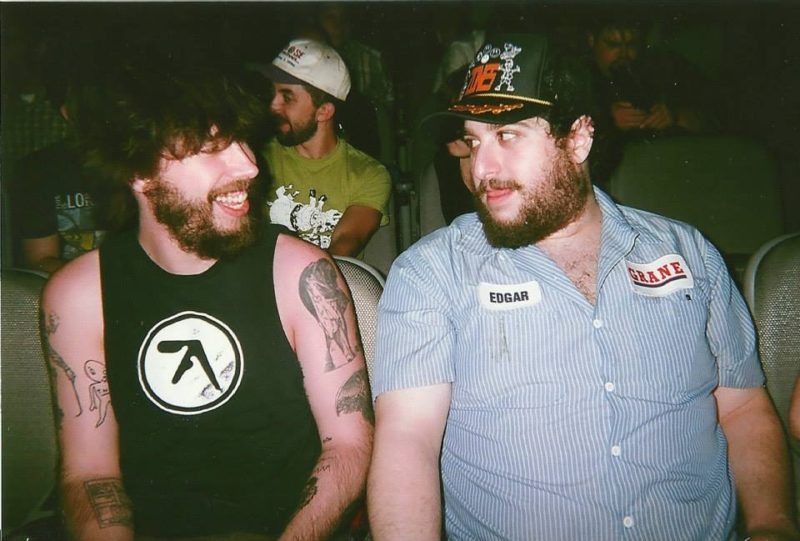