Takeshi Murata is an artist born in 1974 from Chicago, United States of America. From the earliest timing he was using data-moshing in his works. Later in the Glitch movement, he was commonly mentioned as one of the pioneers. On the surface, Murata’s works do not allow for the insertion of emotion. He doesn’t try to hide the perfect cleanliness of digital. On the surface of his works, it is a conceptual object, distant from reality and this concept is always in the forefront. Regardless, for example if we were to gaze into “Get Your Ass to Mars” for a long time, you would have the impression that your looking at a still photo of one scene of a very long movie. The naive mind manifests a still photo with no referential story. As a naive mind must be, it is restless, however at the same time in a meditational state like serenity. Murata’s works create and mindset that makes you feel like something is about to happen, at the same time it feels like the ruins after everything has ended.

In your early works, you took glitch art into your movies as an art expression. How did you come across glitch art? And I’d like to ask you about treating glitch in your works, what do you see or think of glitch as?

When I first started making those videos around 2003, I was coming from a film background and unaware of glitch as an art expression. I was watching films of artists like Pat O’Neill, Ed Emshwiller, and Steina Vasulka. The directness of their approach, putting the medium up front instead of backing a narrative, felt relevant despite having been made over twenty years before. And it was still subversive. I was looking at the digital medium this way, and the idea came in a failed download. I never actually watched the movie I attempted to pirate, but the dropped keyframes in the compression opened the door to a lot of experimentation.

In your taste of work, I think it has a very psychedelic aspect (I’m sorry, if it is a sort of inappropriate way to say). As for what is called “psychedelic” culture, what do you think of the difference or similarity between your work and it?

There are many similarities in my early videos. Most similar is alternate mind-states as the point of departure, and the goal. Film and video are particularly well suited for this. The illusion, and specifically persistence of vision, is truly psychedelic, but it’s also so powerful that it’s invisible as soon as the movie starts playing.

At the last of “OM Rider”, a wolf man is playing a song called “Taps” with a trumpet, which is played in the US army’s funeral ceremony. I felt it was very impressive in the contrast between the song and the sound of the synthesizer at the beginning of the movie. You have a distinctive taste in terms of the sound in your movies, so I’d like to ask you about the relevance between music and your works.

The wolf playing taps was a recording of a kid who was in his first year, or maybe first week, of playing the trumpet. I loved the sincerity. I found it a fitting tribute to the old man. Despite this sincerity on the wolf’s side, his lack of skill ultimately mocks the old man’s demise.

The soundtrack also creates an opportunity to collaborate with other artists. I look forward to this step in the process, and often the sound will inform the work as well. Robert Beatty and I have worked together in almost all my projects. He is a talented musician, and in recent years shown the same aptitude in visual art. Devin Flynn is another multi-talented artist I’ve been lucky to work with.

I heard your parents are architects. It was very interesting for me that you had lived with birds in the octagon house. Did the environment like that give an influence on your current works?

After years of living in large cities, my wife and I moved into a hand-built octagonal house in the Catskill Mountains of New York. The house was surrounded by sixty foot tall pines, and we had a garden and raised chickens. It was a sharp contrast from our past urban apartment life. My studio was rural, and to a large degree isolated. I kept up with work being made in the cities, though with distance, it had less immediate relevance to me. It was a perspective I hadn’t had since moving to New York City. I began thinking about technologies and their evolving role in our daily experience, and this led to making the digitally fabricated photorealistic still lifes from “Get Your Ass to Mars.” 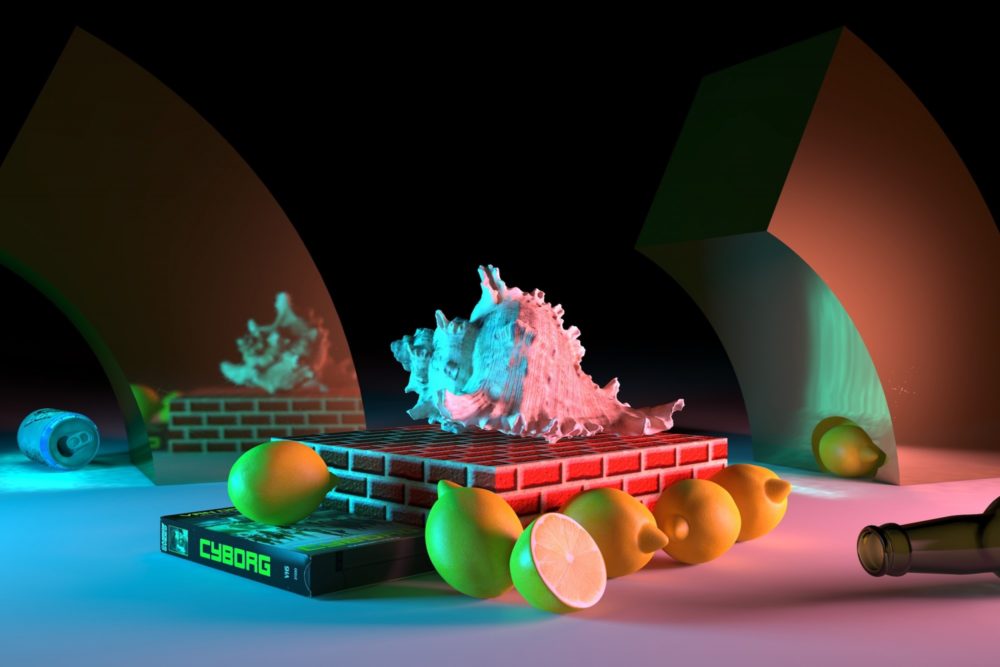 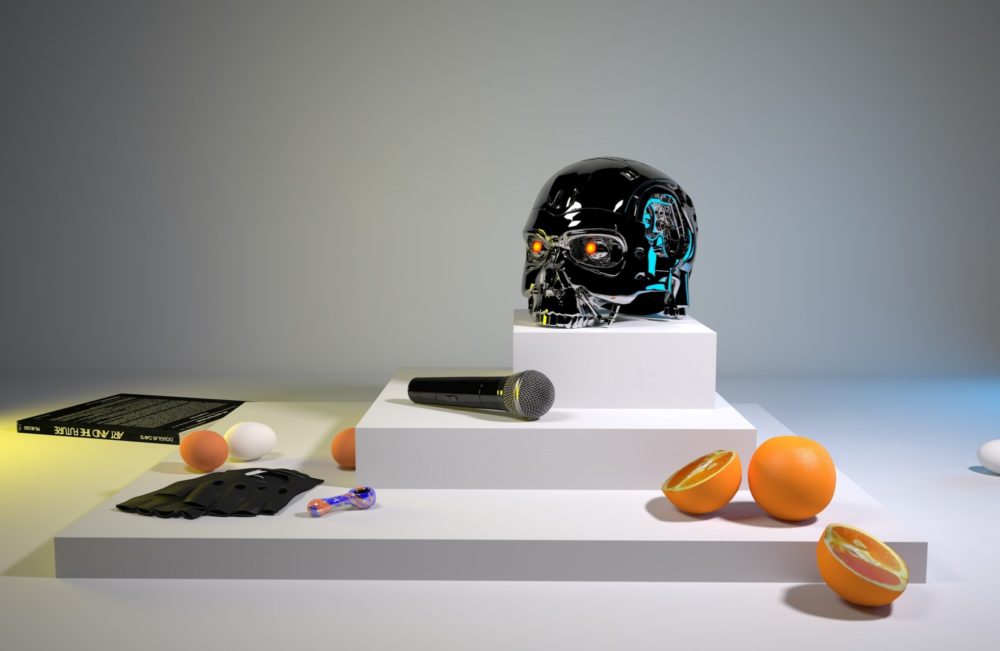 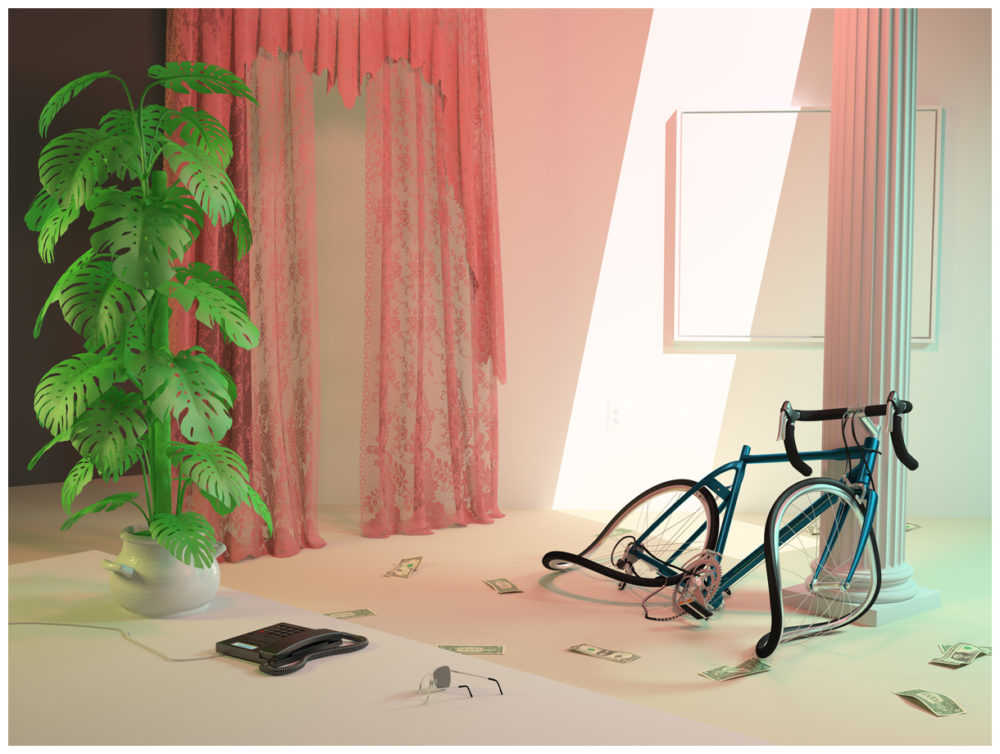 For example, when you are making art works based on time, are you conscious about time and space architecture?

Yes, absolutely. Some directly, like Melter 3-D, and more others indirectly, like my photographic prints. I use the same process I use to make video, prints and sculpture. It’s all rooted animation in one way or another.

Some of your works include concrete motifs which were influenced by subculture, such as video games or animations. And some are abstract. What do you think of the balance between them?

Looking to represent spaces through memory and dreams often leads me here. CG production recreates these states well. Even working within the CG environment is dreamlike at times. And seeing images through screens is a major part of processing almost everything.

Now, we already can’t tell the difference between computer graphics and something real. You seem to try to keep the original CG style. What possibility do you feel on a kind of old-school CG style?

Artificially added dirt and imperfections makes CG objects feel more familiar and realistic to the real world, but I like the hyperreal sharpness. Flawless form and surface can be simultaneously deeply satisfying and unnerving. It’s that contradiction that I look for in my work.

While you changed the way of expression from analog to digital, you might have changed your tools a lot as well, did it affect your vision behind your creation?

All my tools changed. At first I thought keeping a sense of what I knew from film production was important, like time being measured in length of film, for instance. But over the years I’ve moved to appreciate the speed and constant evolution of digital production. It’s affect has been great, as a way of interfacing with the increasingly digital world we live in, from inside out.

I was so surprised the idea of “Melter 3-D”. Why and how did you create it?

I had been playing around with liquid chrome simulations, and at the same time began working with CNC milled sculpture fabrication. I’m fascinated with 3-D zoetropes, first seeing Gregory Barsamian’s “Feral Fount” years ago in the NYC, and later one at the Ghibli Museum. Despite the incredible effect of seeing these animate in real space, the illusion is revealed in the repetition of the objects animating. Every certain number of degrees in the rotation, the next iteration of the animation sequence is revealed. So instead of a single jumping Totoro, for instance, one sees a ring of twenty at the same time.

I thought if I made a sphere of flowing chrome as a 3-D zoetrope, I could conceal this repetition, and thereby hide the mechanics of the illusion. It became a single flowing 3-D orb. Of all my work, this is the one I hope people can see in person.

It’s an appreciation for the action. I make one every decade. Melter 04 is coming up.

Do you have any plans or visions for the future? If possible, could you tell us them?

Yes, I am just starting work towards a new show for Salon 94 in New York. This show will combine sculpture, synthetic photography, and cg video simulations.