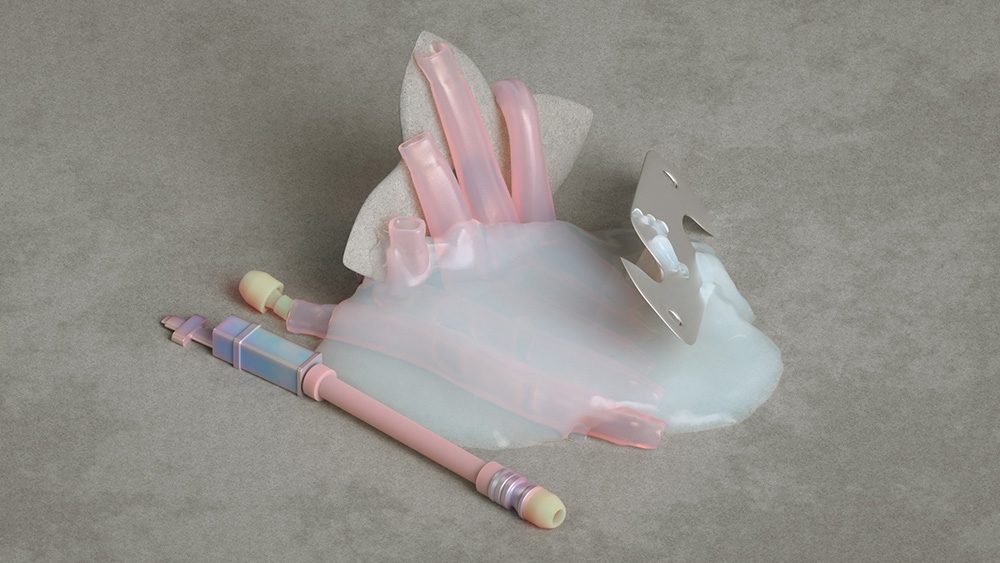 Objects that are somewhat nostalgic, but strange at the same time. As if they are meant to push away and distance the viewer, the objects are placed out of context. Beijing based artist Oliver Haidutschek sways between the reminiscent and unidentifiable, creating works that adorn a distinct strangeness. Upon closer examination, one can see that these works are created with computer graphics. Although clearly post internet in feel, these works have a prominent feel of a still life painting. Although he has connections to the music scene, much of his activities remain very mysterious, such as working under the pseudonym of Aoto Oouch, when he created album artwork for Holly Waxwing. He calls the objects that he manifests “meta-objects”. They are not paintings nor sculptures. I asked him about this new territory for images that has been formed by the culture of screen-mass-consumption.

You learned how to paint and fix frescoes from your grandfather. Have you always had art around you since you were a child?
I was glad to grow up in an environment where being creative was always endorsed, seeing my grandfather painting every day until the day he died gave me a perspective on how i want to grow old. He seemed happy doing it, enthusiastic and driven. It’s helpful to see that he went for it, and that creation itself is fulfilling without fame, money or power.

You studied photography. Why did you switch the way of expression from photographs or paintings to digital art?
I decided to work in a medium that fits to our habit of consumption. How we are used to seeing images is bound to screens – another object in between the art and the viewer. A painting or sculpture as a digital image is a common way to show art on the internet but it bothered me because of the layers in between, the photograph of the art piece became another filter of expression. Working directly for the digital space gives me more control and clarity about my work.

Can we call your works photographs or sculptures? What do you define them?
The images in themselves are not photos nor sculptures, but meta-objects that have been mathematically visualized to represent the look of physical sculptures and photographed within specific contexts. 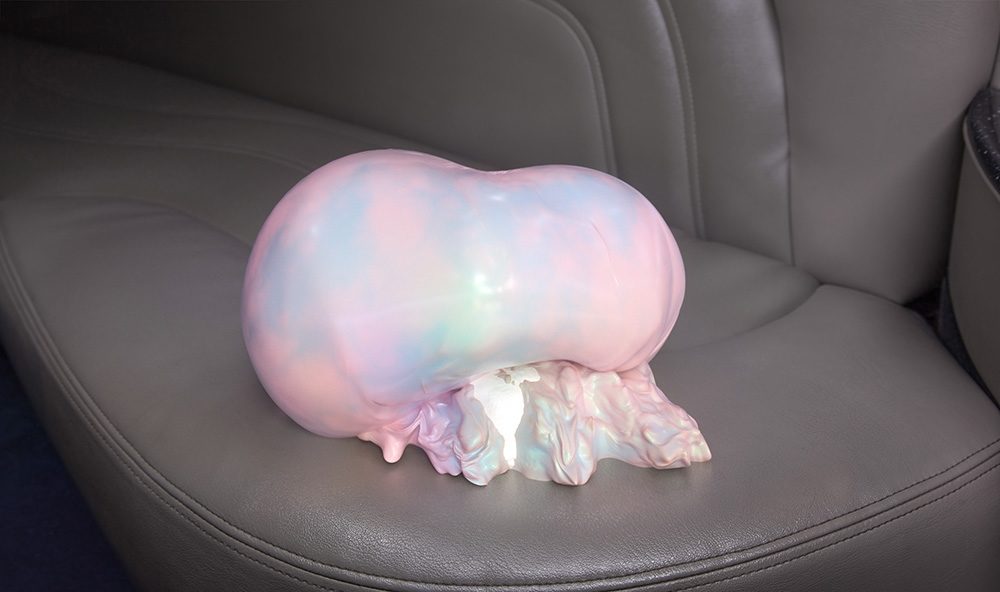 With regard to angle or trimming, it looks like that you make your works so as not to be recognized as art on purpose. Why do you choose the approach like that?
I think with the way we consume images we have also changed our range in liking trivial and unaltered non Mannerism as art. As opposed to the sheer amount of commercial images that is created and manufactured in an similar manner to appeal to our eyes, but those images just became boring or too easy to understand and therefore inadequate for what i want to express, though unfortunately they still function as a vehicle to sell products.

Your works inside of a computer screen have presence as if they are actually present in the real world. This is a very strange feeling for us. What do you think about a relation between something inside of a computer screen and something outside of it?
Images are created in our brain by the firing of neurons, the relation to our experience and the definition of objects and colors. If i touch a glass screen with closed eyes while scrolling down facebook i would not have a feeling for the information displayed on the screen, obviously it’s bound to our visual sense, and this sense follows certain rules and beliefs. we can establish relationships through words in chats because we fill the missing gaps of information in our brain. I think that happens with virtual images too, just remember the old-school computer games that made us feel fear and love. The power in a virtual environment lies in the missing gaps and not in perfection that imitates reality outside binary code. 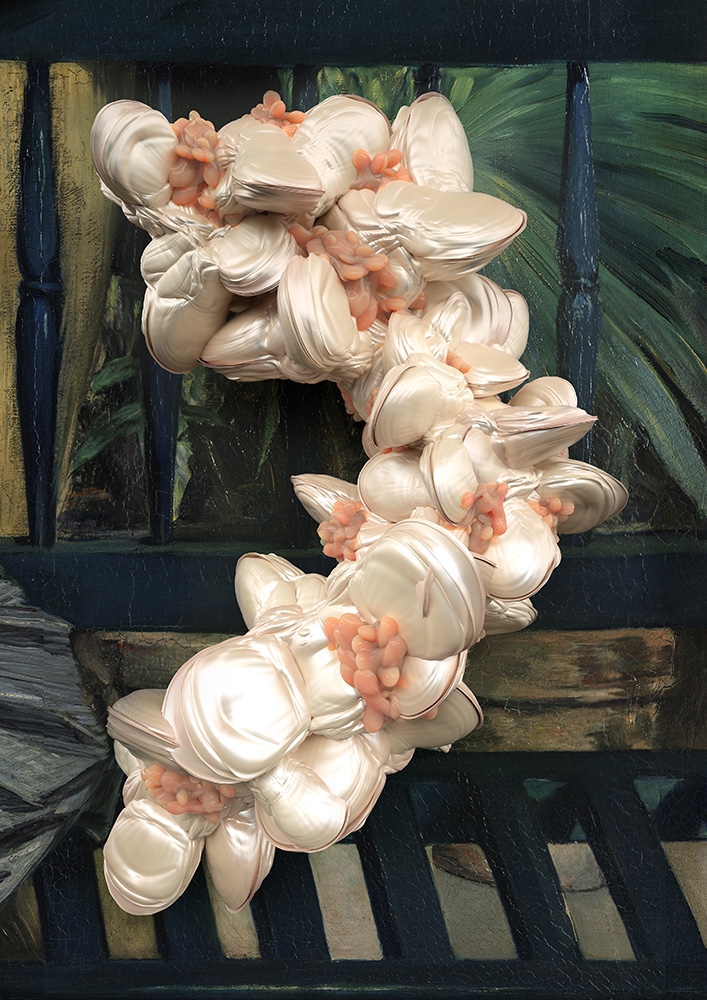 Your works have distinctive features that we can recognize them as yours by their texture or colours. They seem to be organic substances and also inorganic substances. How did you create the view of your world?
I try to reach into unseen combinations between desire and disgust, the moment when natto becomes delicious. There is a moment when our perception shifts from the fear of the unknown to understanding and control. I want to preserve the feeling of the unknown even when we see all elements in front of us. I keep my color and object palette limited because when i was 14, I read in a book that my grandfather had : ” the bigger the palette the smaller the artist”. maybe it’s nonsense but I like to work with restrictions in order to focus and dive into more quality. 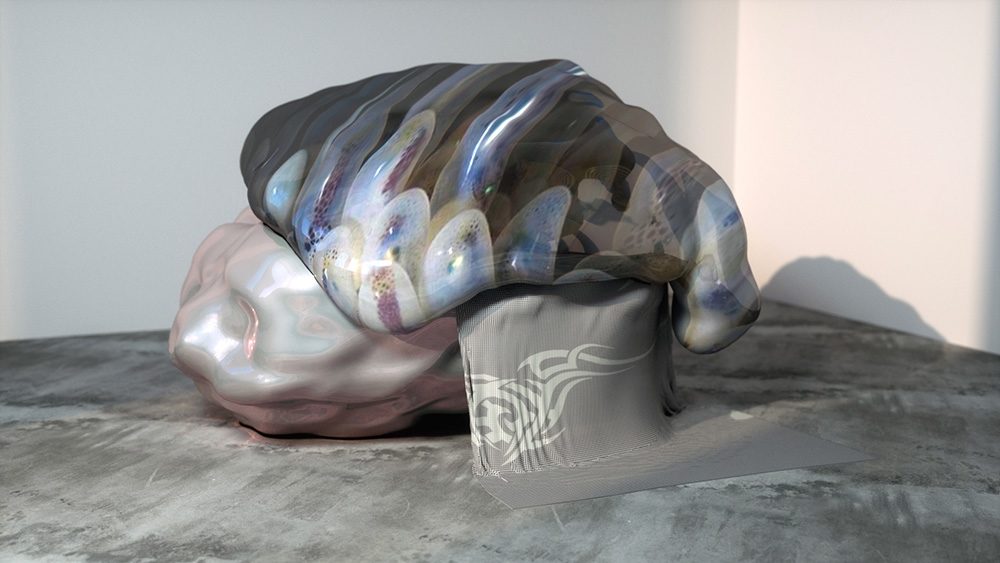 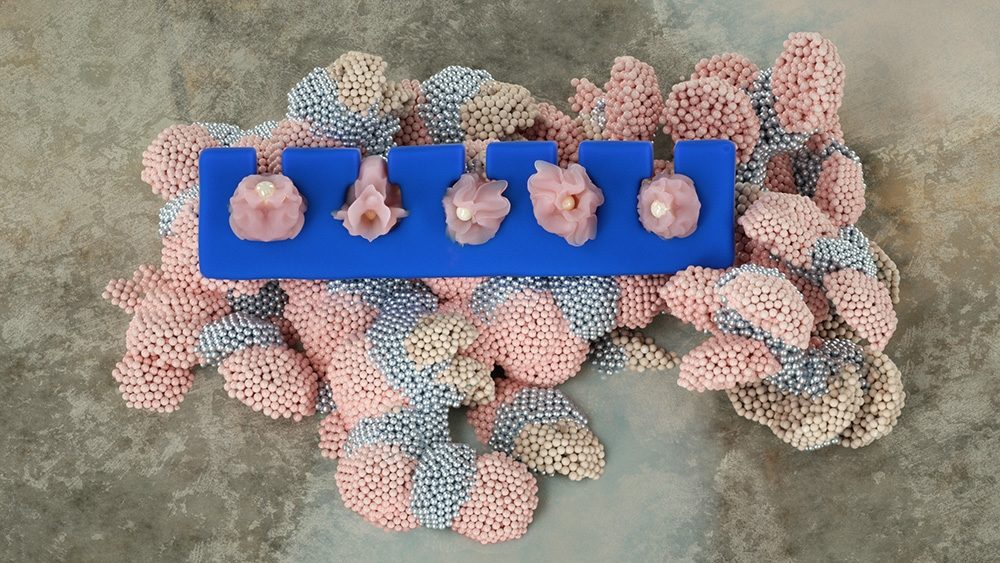 You were influenced a lot by “vaporwave”. What of “vaporwave” attracted you? How did “vaporvave” influence on your works?
Mainly the punk aspect of it: just do it regardless of your background, if you’re into something just follow that feeling and start creating. It felt very free and it seemed possible to just do things and be accepted. I also liked the idea behind vaporwave – at the end of human creation, the last flame of our civilisation, showing our achievements in retrospect through binary eyes.

We feel the current on the Internet is much faster than that in the real world. What do you think about keeping on creating works in the stream like this?
It suits my way of thinking, I am glad I can produce almost in realtime. Vermeer did a dozen of paintings in his lifetime in high quality but how long does it take us to look at those on a blog? Most of the time I walk through a gallery in 5 minutes to scan through all the works. I just don’t stand there and talk about every single piece. This might be the “right” thing to do but to be honest, it just doesn’t work like that anymore. If I catch myself stopping the mouse wheel for 2 seconds, then I know that is something good. We are trained to consume that way now, we also have to accept it and move on.

Do you have any plans to release the next work? If you do, could you tell us about that?
I am thinking about a series of new-school tattoos as a triptych but that is currently in my incubation chamber in the back of my head, let’s see when it pops out.